I said yesterday that a definition is about the least you can say about something. My wife and I had friends over today, and the talk turned to teacups and my wife's impressive collection.

The Net defines a teacup as: a cup from which tea is drunk. 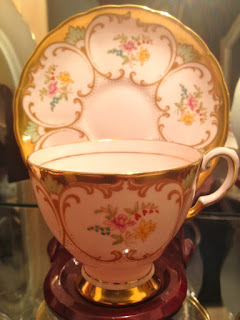 I recall when, as a newly married couple, Daphne and I were first visiting my parents' home. Wanting to impress her new daughter-in-law, my mother served hot tea for breakfast instead of the usual coffe. Daphne's face went ashen as Mom passed her a coffee mug full of Luzianne tea. The breach of that moment has been bridged, but not forgotten. Of course, you only serve tea in fine china teacups, and you should use only Yellow Label Lipton or Red Rose teas for breakfast.

When my family arrived in Nassau for the summer break from teaching, we were always greeted with a cup of tea. We would unload the bags in our bedrooms, and by the time we had returned to the family room, the tea was on, usually accompanied by a slice of Ma Gwennie's pound cake, a rich, buttery bit of yellow heaven that melted on the tongue and in the heart. All the family would usually pop in to greet us, and before the pot was finished more water was brewing. My boys learned to love their Nassau family over a cup of tea.

An auntie gave us a particularly beautiful Tuscan teacup not long before she was diagnosed with breast cancer. A sister-in-law gave us several teacups from the collection of her grandmother who had passed away in Idaho at the age of 100. A dear friend returned from a cruise of the Rhine River with a teacup. My father returned from the Ukraine with a set of teacups. My dear mother-in-law left her entire Shelley collection to my wife in her will. Those teacups are precious.

Just this afternoon, I served tea to my wife, sister-in-law, and a couple of cousins from the Bahamas. Honestly, the teacups were not the center of conversation, but they were witnesses. So much of the life of my family has flowed through teacups.

And this doesn't even begin to cover all the things that a maker of fine porcelain could tell you about clay, calcined bone ash, molds, casting, firing, and glazing. You could spend years becoming a master craftsman, and quite likely, even if you  were gifted as well with words, you could not define teacup as you really know it.

A dictionary definition, then, is an example of what Edgar Morin calls simple thought. Such thought is convenient and handy, and sometimes it is sufficient for the need, as Dave Cormier explains in his post about the Cynefin framework of Dave Snowden. But simple, dictionary definitions are not sufficient for complex, open systems such as Connectivism and Rhizomatics. This, I think, is why Cormier and Siemens do not want to define either concept.

Still, people want to know what they are talking about when they say Connectivism or Rhizomatics, and they are reasonable to ask for definitions. How, then, does one define without reducing to an almost meaningless statement? I like this question.
Posted by keith.hamon at 3/11/2012 10:29:00 PM