Emergence and Crying in Public

Before I engaged with Rhizo14, I was writing a series of posts about complexity and how it affects education in general and my own field, composition, in particular. I want to return to that line of thought, but from an oblique angle.

This past February, I found myself on a panel at the Southern Humanities Conference annual meeting with Linnéa Franits of Utica College, and two others. I delivered a paper entitled Missing God: Meditations on Time, Complexity, and Serres, and Linnéa gave a paper entitled Authentic Narratives Elicited from Photographs: History, Memory or Fantasy? I'm not sure what brought these two papers together in the mind of the conference organizers, but I'm glad it worked that way. Unfortunately, though, I read first that day.

I had written a meditation on the absence of signal, in part to explore the side of life that is not covered by positivistic communications theories that model signal generation, propagation, reception, and response. All of those approaches to communications assume that communications begins with a signal, and I wanted to think about those times when the signal is absent: no signal. As is often my tendency, I was wallowing in the deep end of cosmic chaos, and I tried to balance the far reaches of remote galaxies and epochs with some concrete examples from my own local life. So I spoke of three times in my family history when I looked for a signal and did not get one, and the meaning that emerged from no signal.

One example spoke about a particularly difficult time when my youngest sister did not communicate with me about my oldest son's health crisis. I knew this was an emotionally charged issue and that was, in part, why I used it, or so I thought. I wanted to give some heated emotion to a discussion that was too cool and airy. Though writing reminded me of some raw emotions in my past, I wrote the part calmly. I then practiced my delivery several times, editing to get the cadence and tone right, inserting pauses for dramatic and emotional effect, and each time I spoke the part just fine. I was pleased with myself. I was striking just the right emotional, minor, bluesy chord at just the right time.

Well, I wanted the part to move my audience, but I didn't expect it to move me. As I started reading the part about my sister, however, I could feel my throat tighten, my face tingle, and tears swell in my eyes. I almost panicked. I can't do this, I thought, I can't cry at an academic conference. Well, I was wrong. I could cry, and I did.

I didn't completely break down, I don't think. At the last second, I decided to embrace the moment and ride it, and that gave me the ability to lean into the reading, though with a wavering voice, and complete the presentation. So the paper worked, though not at all in the way I thought it would. After our panel, Linnéa promised to share with me her own account of crying in public, and a week after I returned home, she emailed me a copy of her article Mothers as Storytellers in the Lewiecki-Wilson and Cellio book Disability and Mothering: Liminal Spaces of Embodied Knowledge (2011). I've just read her article, and it helps me understand what happened to me. She describes a retelling of a well-crafted story about her own son's disability, which I quote at length:

This telling became completely different. I found myself becoming more and more moved by the words I was reading, to the point where my eyes welled up with tears, which eventually spilled out onto my face as l was overcome with sobs. I was a mess. My kind peers passed tissues my way, and the professor was gracious and gentle as I tried to regain my composure. I was perplexed by my response and struggled to figure out why this telling of the story was such a different experience for me than my typical presentations. For some reason, reading my written word aloud multiplied the emotional impact it had on me. The story was the same as it always had been, and I already knew the admittedly constructed happy ending. The words on the page were somehow more real, more powerful because of their written and then aural form. As I heard myself reading these words to my classmates I became a listener as well as narrator, a participant who received the story and who was not in control of the happy ending. The roller-coaster track had become unfamiliar to me, and the turn startled me as it did the rest of the group. I was reminded that the story of my son’s birth and early life was not the one I had mentally written before it happened, the one that other mothers had told me to expect.

By the way, you should read Linnéa's article, as it is about so much more than crying in public, but that is the part I want to respond to here.

Our experiences were similar: we both had a speech that we already knew, but when we spoke it before a different audience, then a new meaning emerged that neither of us expected. My leading question is, where did this new meaning come from? We both wrote our articles, and that emotional meaning was not there, at least not in that way. We both delivered the articles at other times, and that meaning was not there. So where was it hiding?

The communications triangle will do, though it is a static, flat model of an emerging dynamism. Think of this model as a snapshot of a football game—it makes no sense and is useless unless you already understand football. This model says that any written communications is made up of a writer, a reader, a subject, and a text to connect the other three, like this: 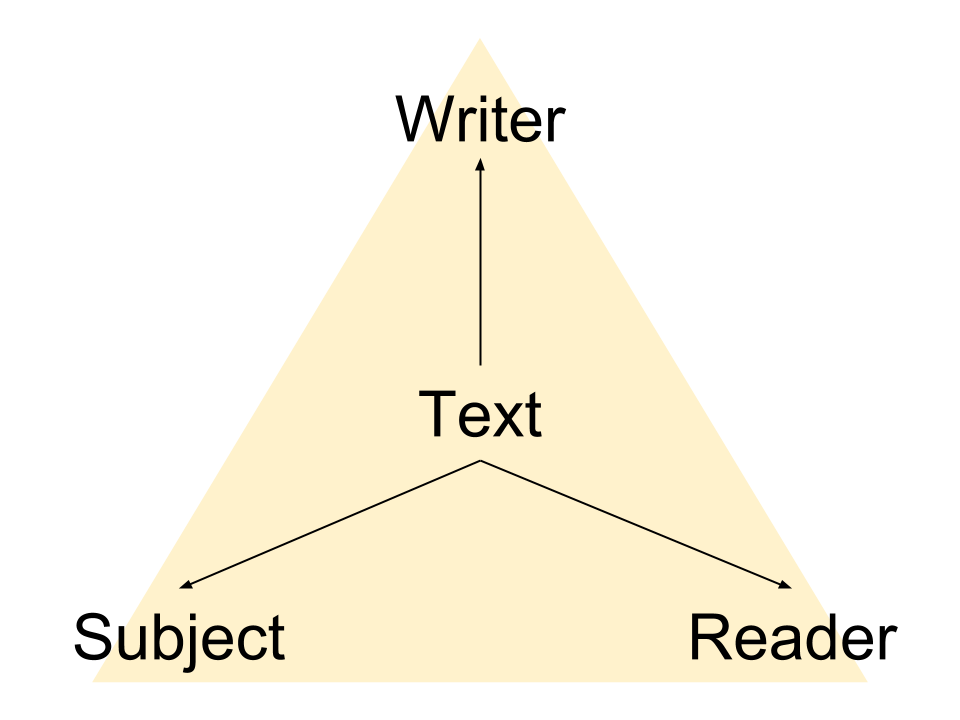 Literary scholars have variously located meaning in one or the other of these four points: in the writer's mind, in the reader's mind, in the world, or in the text itself. More progressive minded folk of the latter part of the 20th century attributed meaning to the interaction and social agreements between writer and reader. The emergent (think complexity) view says that meaning is not a static property of any one of these points but a dynamic property of the interaction of all four trajectories. Change any one of these trajectories, and a different meaning emerges. This makes meaning the emergence of a very complex set of interactions. Actually, it's more complex than that when you consider that each of these trajectories—writer, reader, subject, and text—is also an emergent property of countless other trajectories. And it's more complex still when you consider more than just these four trajectories: throw in the technology, the social context, economics, philosophy, and so on.

Then consider this: all of that is lying in wait in the undifferentiated noise, the background, until a reader engages this nexus of trajectories, bringing it/them into relief against the noise, and then releasing them to fade back into the noise. If you are reading this post, for example, you are bringing into relief a number of ideas to which I, the text of my post, and the subject contribute only a part, maybe a small part of the meaning you see emerging. All of your other readings (to pick just one other stream of many) is also contributing meaning to your reading, and I am likely oblivious to this trajectory of readings as are the other readers of this post. Your meaning cannot be my meaning, and should you read this post later in life, your meaning now will no longer be your meaning.

The principle of emergence appears to work throughout reality, and not just in books and blog posts. In their article The Sacred Emergence of Nature (2006, in Clayton and Simpson's The Oxford Handbook of Religion and Science, 853-871), Goodenough and Deacon explain that emergence works from the ground up, and maybe from below the ground up:

Emergent properties arise as the consequence of relationships between entities. Robert Laughlin (2005) intriguingly suggests that emergent properties arise even at the level of relationships between subatomic entities—indeed, he suggests that the very ‘laws’ of nature may prove to be emergent—but since we are not trained in discourse at this level, we will begin with relationships between atoms. Atoms interact with one another, and hence generate emergent outcomes, in accordance with two general features: their energy and their form. … The key concept: if one starts with something like a water molecule, it is nothing but two hydrogen atoms and one oxygen atom, but each molecule has something-else properties that cannot be ascribed to hydrogen alone nor to oxygen alone. The interaction between the three atoms entails a reconfiguration of electron orbitals and generates a trapezoid-shaped entity that is more electrically positive on one facet and more negative on the opposite facet. Compared with hydrogen and oxygen atoms, a water molecule has unprecedented attributes, because the joining of these atoms has distorted the shapes of each and produced a composite shape with its own intrinsic properties.

I was surprised and initially embarrassed, though I don't know why. I know that meaning is emergent and dynamic; still, I was surprised. And now I know that I can cry, and why, in an academic presentation. Thanks, Linnéa.
Posted by keith.hamon at 5/29/2014 05:24:00 PM