Asignifying Ruptures in the Classroom

This definition already sounds too willful, too under the control of a signifying, overcoding entity (the rhizome itself), and that is the wrong impression. Rhizomes are assemblages of energy, lines of flight, accretions, deep pools and rapidly running spreading streams. Asignifying ruptures are what rhizomes do, they are the exercise and expression of force, regardless of some intending entity. Though sometimes rhizomes may intend to rupture, they will rupture with or without intention. An eighth-grader may act out to reject the label of student applied to her by family, school, and society, but eventually she will age (a line of flight, a spreading of energy) and will rupture from her student label, whether or not she intends to do so.

A rhizomatic rupture is asignifying; that is, it stands against or ignores any label applied to it, rendering the label sterile, inappropriate, incoherent, an obvious power-play by the signifying, overcoding fascist who applies it (even if that fascist is the rhizome itself). It's the rhizomes way of saying, "I am more and other than just this," whatever this is.

D & G describe how a book is an assemblage that proliferates through asignifying ruptures, thus highlighting the fiction of a book's connection to a signifying author or to signifying readers. "To attribute the book to a subject is to … fabricate a beneficent God to explain geological movements" (3). Macbeth, then, is not attributable solely to the genius of William Shakespeare, anymore than this blog post is attributable solely to Keith Hamon. D & G make sure that we know that A Thousand Plateaus is not attributable to them alone: "The two of us wrote Anti-Oedipus together. Since each of us was several, there was already quite a crowd. Here we have made use of everything that came within range … We have assigned clever pseudonyms to … render imperceptible, not ourselves, but what makes us act, feel, and think … We are no longer ourselves … We have been aided, inspired, multiplied" (3). What kind of author is this? Who is responsible for the meaning of this book, A Thousand Plateaus? Is authorship a fiction? Is it a useful fiction? How does this fiction of sole authorship obscure the nature of A Thousand Plateaus? of Macbeth? of this post? of anything?

But I wander, sheer, proliferate, spread, rupture. I'm not sticking to the topic.

Back to asignifying ruptures, which after all is the label for this post, an attempt to territorialize the discussion, the topic. It's my attempt to say this post is about this topic and nothing else. It is a convenient fiction, this idea of topic, that most of my readers will understand and follow. I use the label asignifying ruptures, "because it's nice to talk like everybody else, to say the sun rises, when everybody knows it's only a manner of speaking" (3). Like any rhizome, this post is an assemblage of "lines of articulation or segmentarity, strata and territories" (3) which permit me to say the post begins here and ends there and has this part and that part. These strata allow me to point to the organs that make up the body of the post, or the book, or the class, or the anything else. But also like any rhizome, this post has "lines of flight, movements of deterritorialization and destratification" (3). It is at one and the same time just this AND all that. Every rhizome does contain "lines of segmentarity according to which it is stratified, territorialized, organized, signified, attributed, etc., as well as lines of deterritorialization down which it constantly flees. There is a rupture in the rhizome whenever segmentary lines explode into a line of flight, but the line of flight is part of the rhizome" (9).

My post, then, has strata: a thesis sentence, supporting paragraphs with topic sentences, sentences with subjects and verbs, transitional signposts to guide the reader—perhaps, maybe eventually—a conclusion. But it also has digressions, diversions, lines of flight and movements of deterritorialization. The little fascist in my head constantly wants to stanch those ruptures, heal the wounds, and tidy up the bleeding. The little fascist wants to keep me on topic, operating according to the strict lines of logic. The little fascist deletes those asignifying ruptures as I think of them or after I write them in this very space. 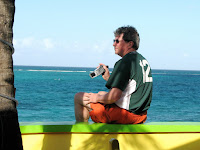 My wife is calling me to breakfast on a beautiful Sunday morning. (THERE! Take that, you fascist!) There are armies goose-stepping through my veins, building bridges across my synapses.

But that was silly, juvenile. The fiction of a coherent essay is indeed convenient and functional. It is a handshake that allows us to connect and communicate, after a fashion, but we must never forget that it is also and always a fiction. We could have created another. Eventually, we will.

Something there is that doesn't love a wall,
That sends the frozen-ground-swell under it,
And spills the upper boulders in the sun,
…
I let my neighbor know beyond the hill;
And on a day we meet to walk the line
And set the wall between us once again.
…
Oh, just another kind of out-door game,
One on a side. It comes to little more:
…
Something there is that doesn't love a wall,
That wants it down.' I could say 'Elves' to him,
But it's not elves exactly, and I'd rather
He said it for himself.
…
He will not go behind his father's saying,
And he likes having thought of it so well
He says again, "Good fences make good neighbors."

I like Frost's connection to play and game, for play is one of the great, perhaps the seminal, asignifying ruptures. Play, humor, laughter, fun all have a tendency to rupture the strata of the rhizome and to open it to a line of flight, a deterritorialization. Any teacher who has made the mistake of using any term with even the slightest scatological or sexual connotation in front of a group of seventh-graders knows how quickly humor, laughter, and fun can rupture the lesson and create a line of flight outside the classroom and into the bathroom or bedroom or both.