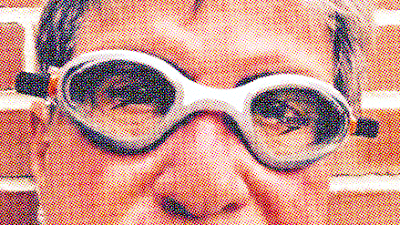 This story has an arc like lightning, starting from the beginning and the end. It splits and forks along the way. Forks within forks.

All ways are taken in our quantum random walks. This is the Ways.

Kevin, now morphed into Keith, checked the map for the thousandth time. This wasn't bad. Not bad at all. Palm trees, white sand, aqua blue water.

"No," Keith said, "It's changing, moving—slowly, but it is moving. See!" and he pushed it almost rudely in front of her face. Maha stepped over and gently took the map from Kevin's hand. She smiled apologetically at Sarah who remained pointedly focused on her knitting, ignoring them both, her back against a palm tree.

Determinedly unimpressed, Sarah slowly dropped her knitting and then suddenly looked past Maha and Kevin.

Sarah pursed her lips and pointed, "Someone's coming. I'm not sure about this."

Kevin and Maha looked about to see two figures approaching along the beach. Sarah collected her knitting, stood, and took the map from Maha and put it in her bag.

Maha whispered, "Who are they?"

"Well, yes, it is!" said Sarah, her apprehension melting in the faint, clear twinkling of notes scattering across the beach. "I know that tune."


But Kevin was already walking up the beach to greet the newcomers.

"I should think so," agreed Sarah. "Anyone who plays a uke has to be good."

When the women reached the group, Keith was talking excitedly. He turned when he heard Maha and Sarah approach, and said, "This is Wry and George." He looked back to the newcomers and, pointing back to the women, said, "Maha and Sarah."

Wry nodded and George dropped the uke to his side and smiled shyly.

"Aren't you George Harrison?" Sarah asked, surprise and glee mixed in her voice like afternoon tea.

"Not anymore," George said. "Though that was a pretty good gig—you know, for a three dimensional thing."

Kevin's eyes narrowed and he said, "Don't know them."

Keith, Sarah, and Maha stayed quiet, intentionally not looking at each other.

"You know, loves," George said, "maps are not geography. Maps are not the path. They hardly even point to the path. Actually, there is no path but in walking. You walk the path, you don't follow it."

Sarah smiled and nudged Maha slightly in the side. "Did a Beatle just call us loves?"

Maha frowned. "Really, Sarah, don't be such a schoolgirl."

Sarah couldn't stop grinning. "I know, but a Beatle! Imagine."

"Yeah," said George as he turned to look westward, out to the blue ocean, "and Here Comes the Sun."

The air filled with light palpable, light like honey on the tongue, light like a swarm of bees dancing lightly on the skin, light like the hum of countless creatures stirring beyond the hill, light so overpowering that all else fades to unblinking white.

"We are here," a voice whispered.

This is also part 22 of a storyjumper for Digital Writing Month. You can read the other parts here:
For a mapping of participants check here. If you would like to participate add your name to the Google Doc.
Posted by keith.hamon at 11/19/2015 05:21:00 PM

Email ThisBlogThis!Share to TwitterShare to FacebookShare to Pinterest
Labels: #digiwrimo