#el30: Prepositions on the Edge of Identity

Last week, Stephen Downes assigned an identity graph for those participating in #el30. Like Jenny Mackness and Mathias Melcher, I was initially perplexed that the graph “should not contain a self-referential node titled ‘me’ or ‘self’ or anything similar”. Surely, I thought, any picture of my connections should include me, right? Then I had a light-bulb moment and realized that the web of connections, the graph, was me, and that this view of identity is in keeping with Downes' connectivism theory which says, among other things, that meaning emerges within the network of relationships (edges) among nodes rather than in a single node itself. I subscribe to this belief, but old mental habits are difficult to break. I still want to see me as … well, just me, a single, individual node. So building an identity graph could be a therapeutic exercise for me.

I examined the graphs built by others in #el30 for some clues about how to go about this—I always like a model to use even if I intend to violate the model. Melcher based his identity graph on his Twitter and library interests. Mackness used a variety of life events, roles, and locations. Roland Legrand based his map on his spiritual/philosophical beliefs and life roles. I found them all to be wonderful insights into the people who created them, but none of them clicked for me—not wrong, mind you, just no click.

For one thing, I was troubled by the edges, the links, between the nodes. The nodes at least have labels, but the links are nothing more than a thin line from one node to another. This strikes me as a serious oversight. If the meaning is in the relationships, then the links ought to mean something. In most of the graphs I've examined and the tools I've tried for generating graphs, the links are just skinny little lines. At best, they might have an arrow to indicate directional flow. That did not satisfy me.

Then, I teach writing, and I write. Writing seems to be a solid chunk of reality out of which to build an identity graph, and the chunk is definitely related to how I identify myself. Moreover, writing includes those built-in links (prepositions, conjunctions, commas, and other linking devices) that can add texture and color to the edges. Of course, most language scholars (both poetic and rhetoric) tend to favor the nodes—the nouns and verbs, or actors and actions—of writing and ignore the little words. We don't capitalize them in titles, for instance (Gone with the Wind); yet, it's the little words that connect the big words to each other and create much of the meaning, as I discussed in a handful of posts as part of Rhizo14 four years ago. Prepositions were on my mind because of some remarks by Michel Serres. In his book Conversations on Science, Culture, and Time (1995) with Bruno Latour, Serres suggests that prepositions mean almost nothing or almost anything, which turns out to be about the same thing, but that they do the critical work of arranging and connecting the actors, actions, and settings. It seemed rich at the time, but I did not pursue the ideas very far.

In his earlier essay "Platonic Dialogue" in Hermes: Literature, Science, Philosophy (1982), Serres says, "writing is first and foremost a drawing, an ideogram, or a conventional graph" (65). I do not think that Serres is speaking of graphs as we have this week in #el30—he almost certainly means something like a mark or picture—but I want to play with this connection between writing and graphs. My intent is to build an identity graph using the #el30 posts that I have written thus far. The four posts result in a fairly short 3,147 word document when the text is aggregated. I'm using Voyant tools to analyze the #el30 text, which I also used back in Rhizo14, and you can see my Voyant dashboard here. I also used a dashboard that distinguished each post here. This dashboard has some interesting data about my posts as posts within my blog, but I will not use this dashboard in this post.

Unfortunately, Voyant by default uses a stopword list to eliminate prepositions, conjunctions, and other classes of small words from its tools, deeming those words as irrelevant and mostly meaningless. The documentation for Voyant says it this way: "Typically stopword lists contain so-called function words that don’t carry as much meaning, such as determiners and prepositions (in, to, from, etc.)." I'm dismayed but not surprised. Prepositions get no respect from writers, rhetors, and grammarians. However, I intend to use prepositions as edges in my identity graph. I suspect that the prepositions and other connectors will give the links texture, color, spin, and direction that will enrich the meaning of the local connection and the network of connections.

You can see a word cloud of my posts here:

So I'm following Jenny Mackness' lead and also using Matthias Melcher’s think tool – Thought Condensr. I thought I would map the top 5 words in my posts, but I managed to do just one: data, the most common major word in my four posts. The graph looks like this: 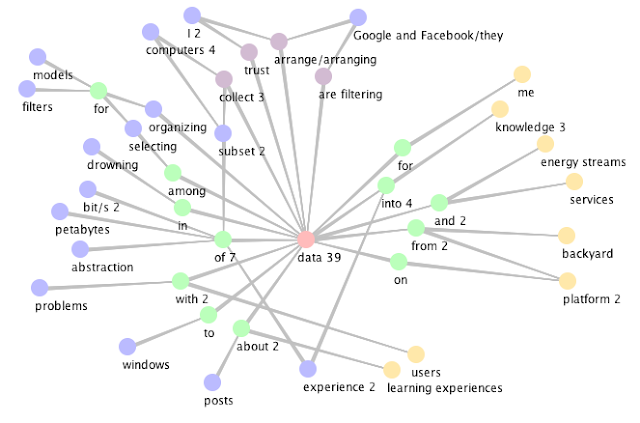 My writing over the past month reveals a preoccupation with data (the most common of the big words in my posts at 39 occurrences), and the identity graph above expresses my particular orchestration of nodes and edges that identifies me like a thumbprint. Everyone in #el30 is interested in and thinks about data, but I daresay that none have a print like mine. Yes, they have similar prints, perhaps, but not exactly this one. Just as all fingerprints have lines, arches, loops, and whorls, none have them arranged in the same way. That graph above identifies Keith Hamon—or at least a bit of him at a certain scale. This graph orchestrates drowning in data from backyard (in general, read the node/edge clusters from the blue node on the left, through a green connector, then to the red data node, and on to another green connector and a yellow node) with the other clusters of nodes and links to create a unique yet still recognizable fractal image.

Unfortunately, I cannot identify a given cluster of nodes and edges, so you can actually create new ones by following left into data and then out to any other node. You can also read from right to left to create even more clusters that generate different meanings. I think these are limitations of the graphing tools, my skills with the tools, or both. I need a graphing tool that will allow me to identify both nodes and edges and the resulting clusters and to view them in a 3-D or 4-D space. 2-D is too limiting.

I realize, however, that I've made the same error that the Voyant Tools creators did: I've put the noun (in this case, data) in the center, putting all the focus on it and building all the meaning around it. I should have put the focus on one of the prepositions—say, of with its 104 occurrences. I simply do not have time just now to graph all 104 instances of of, so I did just the first 10, and it looks like this: 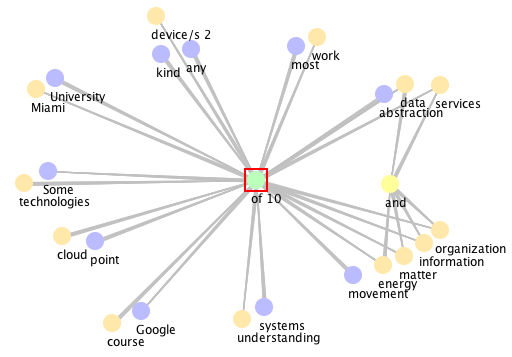 Look at what a workhorse this little word of is. Consider how it connects all these nodes to create meaning at various scales, to make this particular arrangement of nodes and edges identifiably me. Consider one cluster: University of Miami. All of us in #el30 have some university node, but I may be the only one with a UM node. Even if another of us has a UM node, all the other nodes stitched together by of quickly identify me. I'm the one with a University of Miami node and a movement of energy, matter, information, and organization node. Add the 102 other of clusters, and you've pinned me to the wall. That's me.

I'm not really satisfied with these graphs, but I think they are a wonderful start to thinking about writing and how it creates an identity. I'm very happy Downes assigned this. I'm even happier that I tried it. Seems it was great therapy and substantial learning for me.
Posted by keith.hamon at 11/17/2018 10:33:00 AM